Today’s Nail Art Sunday’s theme at Lelack is Disney and I actually had several ideas for this one including water decals, dotting and finally freehanding. I ended up freehanding and trying my new watercolors to see how they worked on nails. The watercolors were a little bit tricky to work with since the surface of the nails was very slippery but once the color ended up on the nail I could continue to work with the colors with much more ease. The base of this manicure is the white coming from Nordic Cap. I found the formula of this one being a little bit hard to work with since the polish almost dried while I was trying to paint my nails. The polish is very opaque though (2 coats in the picture below) and I would consider having this as a white base for several nail arts in the future.

For today’s theme I choose The Muppets since it was a program that I remember watching as a kid. I was actually only planing on doing an accent nail with Kermit but when I was done with him I felt like I wanted to paint more. My choices were to take Kermit off and start painting some flowers (I really wanted to paint flowers with watercolors, so maybe sometimes soon I’ll do that too :D) or keeping it and start painting more Muppets which I ended up doing :D. I kind of like having them on my nails even if I’m only wearing them on one hand :D 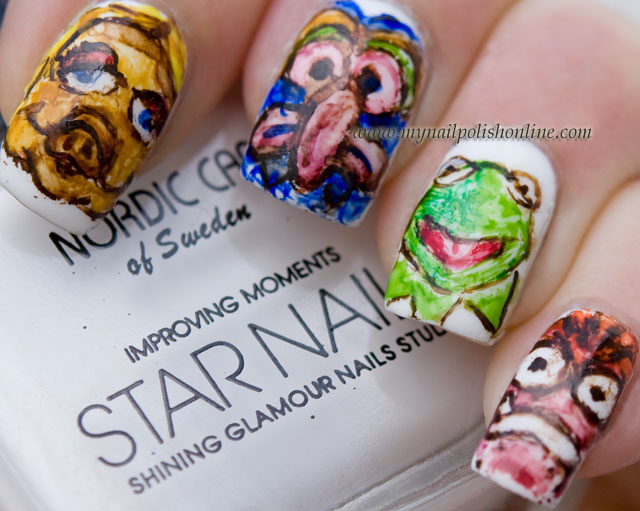